For those who are regular readers of my blogs, speaking about the abilities of autistic children is a common theme. And in many of these blogs you will see sport pop up frequently particularly as we head into the summer months, as we are now. These blogs cover a host of outdoor (and some indoor) pursuits from gymnastics to tennis and pretty much everything in between. We even have a whole section dedicated to autism growth through parenting!

And when I think about all the adventures we have had with our boys through sport, one in particular surprised Val and me. Not that when you have twin autistic sons that surprises don’t come with the package. But as Professor Sullivan so often related “they are such little mysteries” And as parents, we spend so much of our time trying to differentiate our child’s ability from their language that, well, isn’t coming. Nowhere was this more the case with our little Conor. Diagnosed as severely autistic and with a IQ of 50, it was just impossible to get him or Val and I taken seriously when we spoke about his abilities. And what we thought he could participate in. This is such a recipe for isolation and one that Val and I refused to give ground on. Not one inch. But then there are those unexpected miracles that can change everything. Through this time, a wonderful family who we knew from our association with Galway, understood this dilemma. And they happened to have a beautiful and to us enormous sail boat. They would regularly invite us on sailing adventures around Galway bay. Liam and Deirdre’s children were now largely spread around the world and they took a special interest in our two bobble-heads known as Conor and Eoin. Unlike many who met the boys, the Mc Gregor’s treated them with the same expectations as their own children, while taking cues from Val and I in how to manage their language deficits.

So, on one of those sunny and blustery days we were out on another sailing adventure when Liam offered the helm (steering wheel) to little Conor. I just had a sense for what he was capable of, commented Liam afterwards. And boy was that an understatement. Conor took command of the boat and sailed it like a pro. It was like he had been studying Liam’s every turn, every adjustment and had become part of the boat itself. Here was a nonverbal child so easily discarded and ignored by society mastering a complex role straight out of the gate. And someone willing to offer him the chance to do so.

From there we expanded Conor’s exposure to the water and found others who would follow Liam’s belief and understanding. Conor grew his sailing skills in San Francisco bay in a small dinghy and later in larger boats made available by local clubs. And he just loved the spirit of the freedom that came with sailing. And those who know what nonverbal autism represents, the isolation, the frustration and societies ignorance, this concept of freedom truly has a unique meaning.

When we established our European research operations in the National University of Ireland in Galway (NUIG), a new sailing opportunity presented itself. A racing dinghy owned by the Molloy family was sitting idle. And Mary Molloy, a teacher and great friend of Val my wife, wanted it “out of the way”. So, with the help of the local sailing club and a wonderful instructor named Tomas, Conor’s sailing adventures reached a new level.

And so it was that Conor, ably assisted by his autistic twin brother represented the Connacht province in the Kinsale Presidents cup and placed second in his class. It was the first time he had ever sailed in a competitive regatta; sailing an Olympic class boat loaned just for the competition. Rob Gill, our skipper and ultimate cheer leader was amazed. A nationally ranked sailor and wonderful human being, Rob guided Conor through the course and built Eoin’s sail handling. He showed the boys what they needed to do and taught them through the experience of sailing. And did they learn! That is what is so exciting, commented Rob. They learned by what they saw and did. We were communicating all the time, and yet little was said over the noise of the wind.

Flushed with new found confidence the boys took up athletics, running nationally and burying themselves in their language research at NUIG. Much as had been the case in sailing, the boys showed an incredible ability to create software to help children diagnosed as they once were. But then again, that is another story. 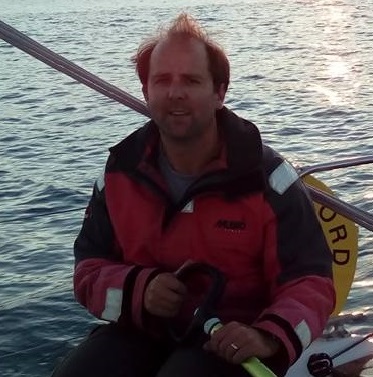 To bring us up to date, Conor is still nonverbal but as determined as ever. He has just qualified to helm a racing yacht in a major offshore regatta – WIORA. About to lead the Show Girl team, the center of his operations will be the Dunmore East sea school and Galway bay marina. And Robert Marchant will be leading Conor’s campaign this year! Robert has a lifelong love for all things marine and really gets a buzz teaching day sailors and racing skippers alike. A veteran of Fastnet, Cowes week, Round Ireland to mention but a few and chest full of silverware! With over twenty years experience, Conor couldn’t be in better hands. He will be personally over seeing everything and Conor can’t wait to start! And most of all, we are all looking forward to another first in Autism: the first time anyone with Conor’s diagnosis will be taking on a fleet in an ocean-going race.

As I mentioned at the start of this post, all this came as an incredible if not welcome surprise. Conor’s sailing ability was identified by accident and grew out of nowhere. In this lies the kind of wonderful surprise that appears simply out of the blue. And I thank god, we were watching and able to create the environment needed to follow the boys lead.

Here are just some of those special moments:

About the Author: ENDA

Enda is an expert in autism language development and advisor to special needs families around the world.

The ALL approach has been extraordinary particularly in the teaching of social and emotional language.

In 30 years of teaching and research I have never met anyone who has re-conceptualized language learning in the way Enda and his team has.